Note: The preparing and copying of DCPs to hard drives is not a component of the easyDCP programs. We provide information about our customer’s experience from their practice

Quality and kind of hard disk are not important but it is recommended to use a powerful interface, e.g. eSATA or USB 3.0. Commonly, carriers from the CruDataPort series are used.

The file-systeme is very important. According to DCI specification EXT2 or EXT3 is required. These file systems are supported natively by LINUX.
Third party drivers/emulations are available for MAC and Windows, but we know from some customers that they had problems with the Windows drivers. It is recommended to install a LINUX system either on a remote or virtual system and have it share the mounted DCP via SAMBA.

The time it takes to copy a DCP onto a mobile hard-drive depends on the DCPs size and on the bandwidth. A 90-minute DCP can take up to 200 GB.

It is highly recommend to verify the DCPs integrity.  To do that, you can start the DCP validation (included in easyDCP Creator+ and easyDCP Player+) and run a Hash-check (e.g. with MD5) of the DCP before copying to the hard disc. After copying run the Hash-check again. The results of the hash-check must be identical otherwise the DCP may crash.

This extra work is in no relation to later exchange of the DCP in the cinema.

Copying needs to be done independently from the easyDCP application, e.g. with Finder or Windows Explorer. Customers with macOS like to use the program DCP Transfer.
Also professional mass-duplication software is available and convinient for larger copy batch jobs.

To edit existing DCPs, the following options are available:

The easyDCP Creator can open, edit and regenerate unencrypted DCPs. Changes to the metadata can be applied within seconds using the "Save Package" function, without time-consuming new image and sound data generation.

Why does easyDCP Creator+ generate KDMs since version 2.1?

The easyDCP Player+ can open unencrypted and encrypted DCPs, unpack and export them to j2c / dpx / tif / wav formats. If desired, an easyDCP project file (.dcpproj) will be created automatically to load the unpacked DCP later in easyDCP Creator or easyDCP Creator+, in which all metadata is supported. Subtitles or other language versions can be added directly here, but other changes can also be made, including re-encryption.

The re-creation of an unpacked DCP in easyDCP Creator+ is almost as fast as copying, since the image sequences are already available in the appropriate JPEG 2000 format. Please note that for each video track, color transformation and letterboxing, as well as global JPEG 2000 re-encoding, must be disabled: 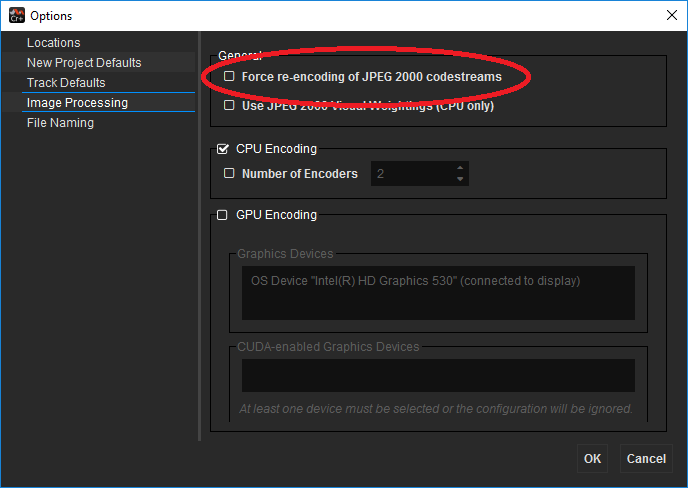 The easyDCP Resolve Plugin can be used to load unencrypted and encrypted DCPs as well.

If a TDL for KDM is required, you only need to import the corresponding projector Certificates in the field " Trusted Device List" available at easyDCP KDM Generator 1.4.15  "Advanced Settings".

You can now encode DCPs faster than real-time.

We recommend enabling GPU-accelerated encoding in the menu "File|Options|Image Processing|GPU Encoding" as it usually outperforms the CPU-based encoder significantly: